While working at various events, an unknown MC named Kyung Man and his younger sister, Kyung Mi, are taking care of their father, who has been hospitalized for a long time. When he suddenly dies, there is no time to be sad and Kyung Man faces the tough reality of having no money for his father’s funeral. To cover the funeral expenses, Kyung Man secretly goes to the province to work at a birthday party but is gets caught up in an unexpected disturbance there. Kyung Man has to bless someone else’s family to send away his own precious father. Through Kyung Man being forced into a paradoxical situation and his sister having to stay in the funeral hall alone without knowing why, Festival shows how ironic life can be. The burdens and hard work of life are not the same for everyone, but life goes on despite limited understanding and little hope. The constantly changing situation Kyung Man encounters and Kyung Mi’s perilous stay at the funeral hall move the suffering relatives them to tears, but through ‘one festival and two funerals,’ the siblings will gradually become stronger and start a new life. 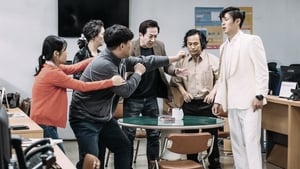